I think I have a problem. No matter how many I have at home I always seem to end up with a few more in my shopping basket when I am anywhere near a beauty store. As my friend kindly pointed out last week while we were shopping and I had just bought three balms at the last store and was browsing for more “You only have one mouth!”

So these are some of the balms I am currently using and have recently bought, I do like to have a few as they do differnt things. I mentioned in one of my ‘Favourites’ posts that I use Lucas’ Papaw Ointment on my lips. I mainly use this at home when I’m sitting in front of the computer or watching TV.

I also like to keep them in different locations such as –  by my bed, in the kitchen, in my coat pocket, at work and in my hand bag. That way I don’t have to hunt round for one. I’m always covered. 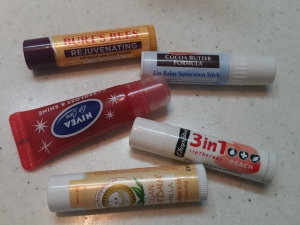 These are most of the ones that I have open at the moment, that I could find and are not at work.

At the top we have a new one I just opened but bought a while ago from Costcos. It’s from Burt’s Bees and it came in a package of three and I don’t think it was cheap either. This one is the Acia Berry one and then there is a mint one and a grapefruit one. I like that these are natural and it smells really great, a strong berry scent that is perhaps a bit to powerful but does not really translate once it’s on so does not really matter. I thought I would like this more than I do, it’s nice enough but it just doesn’t stand out enough for me to buy it again after I have finished these ones.

The next one is the Palmer’s Cocoa Butter Formula, I think this one came from New Zealand. It was probably something that my Mum sent me. She often includes little things like this when she sends me a box. I really like this one Who wouldn’t, Palmer’s is awesome it smells so divine with that sweet chocolaty scent. MMMMmmmm. I’ts also creamy and buttery with Vitamin E and feels really nice and hydrating on the lips. I’m actually almost out of this one so will have to get some more. It’s also good because it has an SPF of 15 because it is a sunscreen stick. Very good for the summer.

Nivea Caregloss and Shine, I bought this one a while ago as I thought a gloss along with some lip care would be a good idea.  It is nice. I think it’s cherry flavour and it smells very fruity, it has a bit of colour to it but not overwhelming. The only problem I have with it is that it has a bit of a sticky finish. No one wants their hair to stick to their lips. I do like the packaging, it’s a cute little tube.

This next one is my favourite, it’s from the masters – ChapStick and is the 3 in 1 LipTherapy in peach. It smells so good and goes on silky smooth. I think I got this one from the local supermarket/department store ‘Home Plus’. I actually just ran out so will have to get some more. I love the texture of this one, it’s smooth and silky with a kind of gel like finish. It’s super hydrating and leaves my lips feeling good for ages. The 3 in 1 part I think means that it moisturises, heals and protects.

The last one was a free gift from iHerb.com when I last did some online shopping. It was a while ago but I only just opened it.  I chose vanilla because it’s my favourite scent. My first surprise was that the stick was green. I’ve never had one that was green before but it makes sense as it’s made from hemp. The good thing about this one is that it is vegan and organic. It also goes on really slick and beautiful just like I like a lip balm to be. The one issue I have with it is the smell and taste, that first moment when you put it on your lips I get this taste of plant/vegetable that I just don’t like. It also smells like that, the vanilla just can’t mask it. I will still use it as it’s only a small thing and it does not continue to taste bad but I don’t think I would buy it myself.

The next photo is some that I just bought on the weekend. I had a bit of a blow out at Watsons and ended up with these three in my basket along with a few other bits and pieces.  I will review them a bit later after I have tried them all. 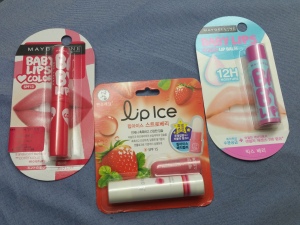 There was an error retrieving images from Instagram. An attempt will be remade in a few minutes.

A brown girl's tryst with makeup, skincare and fashion!

Now posting out of Kingston Ontario