I’ve had this BB cream for a long time, it’s one of the first I ever bought but as happens with many things it ended up at the back of my makeup drawer. I’m pretty sure this one has been discontinued, you might still be able to find it online but I have not seen it in store for a while now. It seems all of the things I like end up getting discontinued.

When I decided to do this series of posts about all of my BB creams I got all my BB creams out and went through them. I tried them all on again with my new knowledge about color matching (gained of course from watching many YouTube videos).

I had originally thought this one was a bit light for me but once I blended it in it’s actually quite a good match. Since rediscovering it I have been using it a lot over the past few weeks..

The Peripera I Love BB Light comes in two shades – Natural Light and Beige Light. I have the lighter of the two which is Beige Light. That is one thing that is sometimes a problem with BB creams, they only have limited shades mostly just two or maybe three if you are lucky. With the international interest in Korean brands I have noticed that they are starting to bring out more shades.

The packaging is really pretty, it comes in a pink tube with a sliver cap. I really like ones that come in tubes or pumps it’s just so much easier. The color is a light pearlescent pink with a lace design over it. It’s very classy looking.

A little bit about  and my skin to start with:

I have quite light skin but not completely pale. I don’t tan easily, I mostly just go red, peel and then back to white. I try to stay out of the sun if I can (or use sun screen) as I’ve had a lot of sunburn in my youth so I don’t want to do any more damage. I have a bit of red especially around the nose. I tend to flush easily, whether its from embarrassment, coughing or drinking alcohol. I don’t have a huge amount of acne but I mostly have at least one or two spots. I tend to get the deep cystic pimples around my mouth and chin during my time of the month.

My skin type is combination and one of my big things is shine control, I hate looking shiny but find that it happens as soon as I put on foundation or BB cream. I have a big nose and I always think it looks bigger when it’s shiny so I’m very conscious of it. I also find that the BB cream or foundation just does not stay on my nose, despite using primer. It looks blotchy and flaky and just really bad. I am trying to find different ways to combat this at the moment. If anyone has any tried and true methods I would be happy to hear about it. I found one online tutorial that showed me an okay way, she primed it and then used a stippling brush and then set it with loose powder pressed into it. I think I will just have to do my nose separate and pay more attention in future.

Back to the review:

One of the things I like about this BB is that it feels really soft on my face after I apply it and wait a few minutes. It kind of dries to a powder-like finish which I really like. I do still find that I am a bit shiny along my T-Zone so I have been setting it with a translucent powder which adds to a more matte finish. Where my skin is normal, on my cheeks, it looks amazing.

A little goes a long way. It is supposed to be full coverage and for a BB I guess it is but it’s not heavy like a foundation so it does not feel like full coverage. It covers my redness and spots pretty well. You can also put a second coat on if you want more coverage but I find one is enough for me, I really don’t like heavy makeup. I go back and use it as a concealer on any really prominent blemishes. 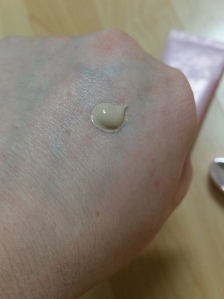 You can see in the photos above that it blends in really well. I have some small raised moles on my hand and it covered them well but you can still see them a bit as they are raised but they are significantly diminished. It also has a bit of shine to it which gives it a brightening look. I don’t really notice it much on my face but you can see it in the second photo.

I wore it out the other night and I had it on from about 7:30pm to about 5am in the morning and it held up pretty good, I used a primer and the only problem place was my nose but to be honest that was not good even before I left. I had some creasing around the mouth but I also had not had a chance to look in the mirror all night. The bars we went to all had unisex bathrooms with urinals out in the main part. It’s not a place you want to hang out and touch up your makeup. So I just had to let it ride. Overall I was pleased with the results but will try it again with the tips I learned to try and combat the issues with my nose.

I find it looks good when applied with a brush but even better when I just apply it with my fingers. Sometimes your fingers just do the job better than an expensive tool.

For an everyday BB cream this one is really good. If you want one that you can wear all day and have fuller coverage than your usual BB cream then it’s worth a look if you can still find it. I would rate this 7/10.

Reviews of the skin care products for us with less than perfect skin. Perfect skin also very welcome.