Another Mizon favourite here, they do have some amazing products. They aren’t as cute as some of the other Korean brands but they are really good quality at affordable prices. This one is part of the Multi Function Formula line, I have a couple of products from this line and so far they have all been nice.

The packaging is baby pink, it has a motif of a snail on the front in white and the name of the product. Being Korea it has a nice long name – Multi Function Formula Snail Recovery Gel Cream. Also on the front it says ‘Lightweight snail gel cream containing 74% of snail secretion filtrate.‘ A good thing about this is that it has the ingredients in English on the box. With a lot of Korean products it’s hard to find out what’s in them if you don’t speak Korean. The directions from the box say ‘Apply an appropriate amount on face after cleansing, dabbing until absorbed’.

This moisturizer is so good, I’ve been using it for years and everyone I’ve introduced to it has loved it too. Well everyone except my sister who wouldn’t even try it because she was grossed out by the snail secretion in it. I personally don’t really care too much about that, I don’t think it’s a miracle ingredient or anything I just really like this particular gel cream.

It’s the first moisturizer I’ve tried that is a gel and it makes all the difference, creams sit heavier on my face and I feel like my skin can’t breathe. This is so light and smooth, once applied to the skin it absorbs very quickly so you are not left with that greasy feeling that reminds you that you just applied moisturizer. This also makes it perfect for under your makeup, it’s hydrating and because it absorbs into the skin it doesn’t affect you foundation or BB cream.

You can easily wear this instead of a base, sometimes I don’t have time to do everything, with this I can skip primer. I would much rather use this if I have to choose between the two, I know it’s nice and moisturizing for my skin. After it absorbs it leaves your skin with a very slight tacky finish so your makeup will adhere well, it’s not at all slippery once it absorbs so you don’t have to worry about your makeup sliding off.

The gel itself is almost translucent, it has a bit of a white cast to it when you first squeeze it out of the tube. It’s very lightweight and silky smooth. You only need a small amount as it spreads out very easily. After you have dabbed it all over you face it will feel a little slippery and cool but this disappears after less than a minute as it absorbs into the skin. It leaves a dewy hydrated feeling behind

It has a faint smell but most of the time it’s barely noticeable, it’s a fresh (maybe slightly chemical, but not bad) smell and it’s so mild I only notice it for a few seconds when I am first applying it.

The one issue I have is that ever since I have been buying it it has always come as a package deal where you get three 45ml tubes for 9,900 won which they say is down from 19,800. It’s a really good price and at first, years ago when I bought it, I figured it was a special but now it just seems to be the normal price. It would be better if they just made it in a bigger bottle and saved some packaging.  Although I do like the small tubes for gifts, you can keep one and give the other two away which is nice.

Recently when I ran out of my last tube I went to repurchase and could not find it anywhere on Gmarket. I assumed the must have discontinued it and was very sad. I went on to buy a whole lot of different moisturizers to try and find one to replace it. I have been trying out my new products but have not found anything that I like quite as much. Then one day I was on Gmarket again and I noticed it had come back, at first I thought maybe I had missed it but I had done extensive searches. Then when I got my new tubes, I noticed that some of the words on the packaging had changed. They must have been having to re-package, which would explain why I couldn’t find it when I wanted to buy it.

This is what the old tube looked like, it’s just the wording that’s a bit different. The tube is bit smushed up because it was my last tube before I went to repurchase, I had to squeeze out every last drop. 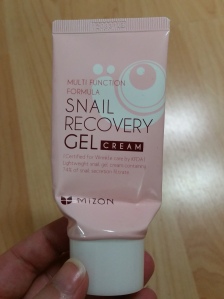 The only thing that changed on the front is that it used to say ‘[Certified for wrinkle care by KFDA]’ this has now been removed. They also made the writing a bit darker so it’s easier to read. The Korean writing on the back seems to have changed a bit, there was more of it on the old tube and it used up more of the space. It ‘s now condensed into a small area and they removed the Mizon logo from the back which I thought was weird. It has the name in Korean but as you can see in the picture it used to have the logo and the name in English at the top.

Other than that the product seems exactly the same. I don’t really mind that it’s not certified for wrinkles anymore, it’s not as though I really believed it in the first place. I use it because I like it and it feels nice on my skin.

Follow my stories from one adventure to the next

The Soul of Seoul