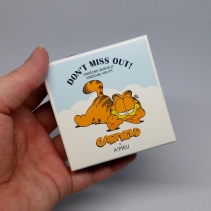 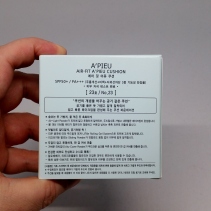 This is the A’PIEU Air Fit Cushion SPF50+/PA+++ (Garfield Edition) from a special collaboration they did a while back. I love Garfield and these cushions were super cute and cheap so I grabbed a few of them. I have two shades no.21 and no.23. I’m usually a 23 but the problem with this is that sometimes the 23 is too orange for me and this is the case here. The 21 is a bit pale but I would rather be pale than orange. 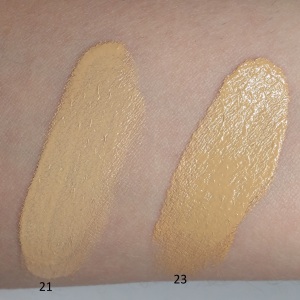 This collaboration version of the Air Fit Cushion was identical to their original cushion and you could get it in that original plain silver case as well. They have since gone though a few different updates on the cushions so I’m not even sure if this one is still available. But I figured I may as well still review it because some people may still have it and you can still buy it through re-sellers.

These were about 5,800 won I think or something close to that. I got a few of them for friends and family because they were such a good deal. It contains 13 grams of product which is a bit smaller than the standard 15 grams but when you consider the price it makes sense. The product can be popped out and you can use a refill in it but this Garfield Edition was not sold with a refill.

So lets talk packaging – it’s adorable of course it has Garfield so it is always going to be something that appeals to me. Garfield is one of my favorite cartoons. The picture is printed onto the top of the cushion case. I don’t take mine out much but my friend had the same one and she kept it in her bag. She found that the picture actually wore away pretty quickly and she was left with a blank silver case. It’s a bit disappointing but for the low price I guess you can’t expect too much.

The picture is on the box and the cover of the case. The air puff that comes with it is a plain one with A’PIEU written across the little ribbon handle. It’s a very soft version of the air puff and it works well to distribute the product. The case also has a good sized mirror on the inside lid. The mirror is covered with a protective film when you first open it so you have to peel that off. 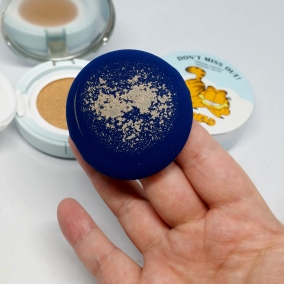 The rest of the case is pretty standard. It’s a light plastic case that seems a bit bulky but I don’t think it’s any bigger than others like it. I think it just looks bigger because it has the sharp edges on the lid rather than the rounded ones like Etude House cushions have. It’s well made when you consider the price and I don’t have any issues with it.

The BB cream formula in the cushion is lightweight and moisturizing. It has a slightly dewy finish. The coverage is light to medium so you can build it up if you need to but it’s still not going to cover anything extreme. It has a bit of a blurring effect on your pores so it looks quite nice and smooths and evens out your skin tone.

Because it is moisturizing it would probably work well on dry skin but I have noticed that if I have any dry or flaky skin patches it catches and clings to them. It makes it much more noticeable. This can be combated by making sure to exfoliate before using. I have combination skin and can get quite oily in the T-Zone. I like to keep my skin more matte and this does have a dewy finish but I can make it work. I find that using a primer and a powder are a must. If I don’t it will quickly turn into an oily mess.

The Air Fit Cushion lasts okay but it’s not the best I’ve ever used. This may be due to the oil factor that I mentioned above. I find that it wears off the bottom of my nose within about 2 hours. I do have this issue with many other BB creams and foundations so it’s not an isolated problem. Therefore while I would say it lasts about 5 to 6 hours it starts to wear away after 2 or 3 hours for me. You can touch up with it throughout the day of course and that’s one of the great things about cushions – they are portable so you can take it with you and touch up as needed.

I find that it has some transfer, if I touch my face I usually get a little bit on my fingers. I have a bad habit of touching my face which I know I shouldn’t but it’s just one of those things. It does help when I use powder; I definitely don’t see as much transfer. Another thing is that it does is settle into the lines on my face. I have two large creases in my forehead and this settles into them. It’s not a huge deal as you can just smooth it out with your finger if you are in a hurry or if you are touching up you can use the puff.

The scent is a little on the strong side. It’s a kind of floral, honey scent so it’s not terrible but I would prefer it if it was a bit less. I don’t think you can’t really smell it once it is on your face.

I don’t use this that often as I have so many cushions but I did notice that it had dried up a bit when I went to use it the last time. So if you do have it make sure you use it up quickly and don’t leave it sitting around like I do.

Overall it’s not a bad cushion for the price, I think some of my issues with this one are the smell and the finish. My friend has this one and has used it all up, she quite liked it especially for the price although as I mentioned above the picture wore off on hers so she was disappointed with that.

Follow my stories from one adventure to the next

The Soul of Seoul