This Labottach V-Up Hydrogel Patch is for elasticity of chin and neck skin. This was an interesting product and one that I have not ever used before.

The following is some information about what this is and how it works from the box –  ‘V-Up is a hydrogel type patch which provides effective and intense care for beautiful chin line which area is also known as V-line. This patch enhances the chin’s lacking elasticity. Besides the patch had soothing, cooling and moisturizing effects due to its hydrogel technology. This patch can deliver active ingredients and moisture to the skin for maximum 8 hours in comparison with existing hydrogel mask pack. The special designed shape of the patch provides convenient and simple usage.’

One box has two resealable packets in it and each packet had 2 patches so you get a total of four patches in a box. The retail price for one box is 7,600 won. 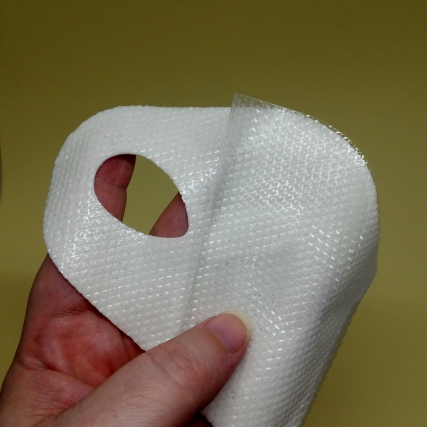 According to the the instructions you should clean and dry the area of application first, then peel off the backing film and apply to your chin, hang the patch from your ears, gently press the edges for better adhesion. It didn’t really hang as I had to pull it over my ears with a bit of force but it was surprisingly stretchy.

It is recommended that you leave for 2 hours to get the effect but you can use for a maximum of 8 hours. I found that after two hours my ears started to ache, actually it was before that but I held on so that I could at least use it for the 2 hours. The other times I tried it after that I couldn’t even last two hours.

I found this product hard to get on but once it was on it didn’t really move. Some of the edges lift a bit when you move but they are easily smoothed down. Other than the ears it was not really uncomfortable or anything. I don’t think I would like to sleep in it but I guess if things like that don’t bother you then you probably could.

I didn’t see any effects from this product but I think it’s really for people who already have a defined chin and are just looking to keep it nice and tight. I hardly think my big neck and chin(s) are really what the Korean developers had in mind for this product. This may have been why I had trouble getting it on.

I don’t really think it is something I would ever buy or use myself. But of course there are many people who do use them or they wouldn’t make these products. So if you are someone who uses this sort of thing then I would say it might be one to try. It was reasonably comfortable and if you had a smaller face it probably wouldn’t pull on the ears as much so you probably wouldn’t get the ache I did. If you have used products like this before then you will know what you find comfortable and not.

Labottch also make a range of other patch type products all designed to address different concerns. You can find more information on these and the other patches on their website www.labottachshop.com.

Disclaimer – This was provided to me for free by the K-Beauty Expo for review purposes.

Reviews of the skin care products for us with less than perfect skin. Perfect skin also very welcome.